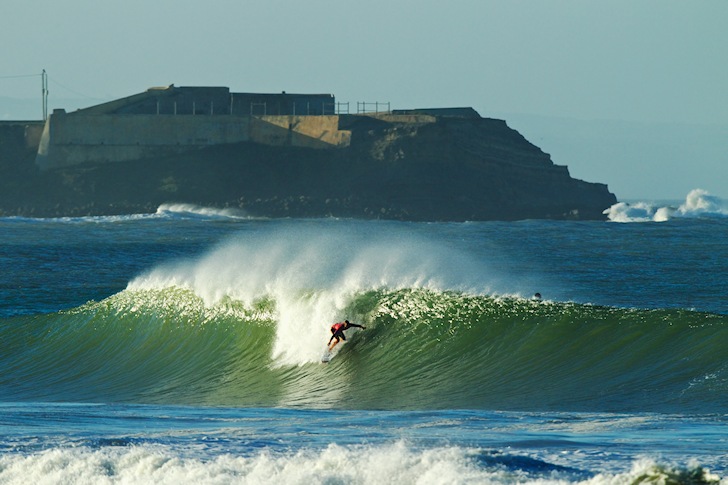 The Wave Capital of Portugal, Peniche—home to the MEO Rip Curl Pro stop on the World Surf League tour—has become the world’s first surfing destination to be benchmarked for sustainable surf tourism.

In July 2017, STOKE Certified representatives met with various stakeholders in Peniche over the course of two weeks to evaluate the destination’s tourism plan, community development, cultural heritage preservation, surf resource management, and environmental conservation initiatives. The assessment benchmarked Peniche against the new STOKE Surf Destinations standard of 84 criteria, which was built on the foundation of the Global Sustainable Tourism Council’s Destination Criteria and adapted to the unique sustainability challenges that coastal communities and surf tourism destinations face.

STOKE (Sustainable Tourism Operator’s Kit for Evaluation) Certified is the world’s first sustainability certification program for surf and ski tourism operators and destinations. Through its network of independent evaluators, STOKE verifies the legitimacy of sustainability claims and provides transparency for the public through its certification programs—STOKE Surf and STOKE Snow. STOKE Surf has member properties in Fiji, the Mentawai Islands, Costa Rica, Portugal, Liberia, Baja California, the Telo Islands, and the Philippines, while STOKE Snow has members in California, Nevada, Oregon, Washington, and Maine.

As the first destination to join the STOKE Surf Destinations Pioneer Program, the Mayor of Peniche, António José Correia, stated “Surfing has put Peniche on the global tourism radar and completely transformed our economy over the past decade. Our participation in the STOKE Certified Surf Destinations program has provided us with an objective evaluation of our tourism industry, and resulted in a comprehensive and innovative plan to secure a sustainable future for Peniche as a major international surf destination. We are proud to be the first surf destination in the world to take this important step toward sustainability and look forward to working with STOKE on the path to certification.”

Following the site visit, STOKE Certified developed a Roadmap to Certification report that outlines strategies for closing the compliance gaps identified in the benchmark in order to improve sustainable destination management practices and achieve certification in the next few years.

STOKE Certified Co-Founder, Carl Kish, expressed that “Portugal has prioritized surf tourism at the national level and Peniche is a glowing example of the country’s potential to become an international leader in sustainable tourism and surf resource management. We commend Peniche for capitalizing on its diverse array of tourism assets and empowering its local network of passionate stakeholders to create a plan for developing a well-rounded tourism experience. One that encompasses world class surf breaks and ocean sports, unique biodiversity and geological anomalies, and rich cultural heritage representative of the Romans, bobbin lace, fishing, religion, and political revolution.”

Peniche’s push for STOKE Surf Destinations certification has been driven by Mayor Correia and the Municipality of Peniche and supported by faculty and researchers from the Instituto Politécnico de Leiria (IPL). The development of the STOKE Surf Destinations standard has been over a year in the making and now the criteria have been tested in the field and will continue to be refined as more destinations join the STOKE network. The STOKE criteria for surf tourism operators underwent the same process six years ago and has expanded to nine members in six countries becoming the international sustainability standard for surf tourism.

STOKE Certified Co-Founder, Dr. Jess Ponting, articulated “Peniche is taking control of its destiny as a surfing destination and by adopting STOKE’s Surf Destinations standard has positioned itself on the cutting edge of surf destination management. Beyond surf break protection and surf school regulation, STOKE’s standard involves: developing organizational infrastructure to diversify the tourism base by incorporating other natural and cultural wonders of Peniche; developing strategies for improving the quality of the surf tourism while respecting the needs of local surfers; and, facilitating innovation in developing sustainability best practices across transportation, accommodation, and resource management that complement the great work the municipality is already doing.”

STOKE certification will ensure that in addition to the region’s position at the center of Portugal’s surf tourism industry, Peniche will highlight its other treasures including the 18,500 hectare UNESCO Biosphere Reserve that includes Berlengas Island and the peninsula of Peniche; the 16th century fortresses and the political prison that played a significant role in Portugal’s political revolution of 1974; and its ancient Roman history intertwined with lively and vibrant fishing and bobbin lace traditions. Initiatives like the Waveroller wave energy project, West Region Geopark, and the Municipality’s alternative transportation plan, will propel the destination into a best practice leader.

For more information, visit Peniche’s STOKE profile at http://www.stokecertified.com/members/peniche/ or the Municipality of Peniche website http://www.cm-peniche.pt